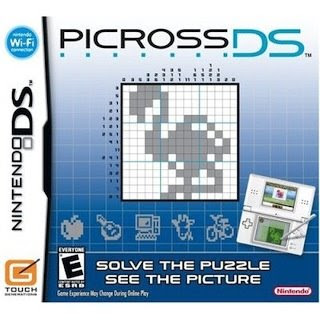 Picross? Pic-crack more like. This is a very simple game, a bit like the old logic problems, but reduced to even simpler aims. There was a game on the GameBoy Advance called Mario's Picross originally, and this is a DS version with all the abilities that the DS brings. In smaller puzzles, like the starter 5x5 grids, or the basic 10x10 grids, the puzzle is presented in its entirety on the lower screen, where you mark boxes with squares or crosses in order to bhuild a pixelised picture of something. In the later levels, grids are 15x15, 20x20 or even 25x20 on the last level and at that point, the ability to either put down a square or cross is joined by a scroll function and a zoom function to grant you an oversight of the entire puzzle, like the top screen (not something I use often). In normal mode you are increasingly penalised when you make a mistake - with your first mistake two minutes are added to your total tim 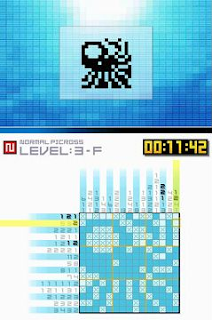 e, then four, then eight and eight and eight and so on. If you go over an hour you have failed. With free mode you get no penalties, but also no help - you have to keep rearranging your pieces until you solve the puzzle. This was a game I got from the supermarket because it was on offer cheap. I also got it to try and get Fona playing a little on the DS. It didn't take for a couple of months, but now she loves it.

This may be simple, but like the best puzzle games it doesn't need to be any more complex to keep you engaged, sometimes for hours at a time. Best of all, if you wish to try it for yourself, you don't need a DS or to spend money. While looking for images to pepper this review with I found a site called wiipicross where you can play the games for yourself. Try it, but don't blame me if you become less productive... 5/5
Posted by BeeVee at 12:44