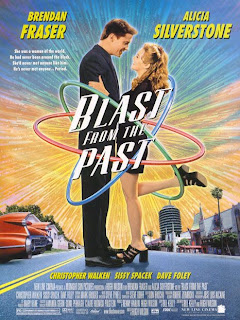 Blast from the Past (219) is a sweet little film. The story revolves around Christopher Walken's character Calvin and his pregnant wife Helen, played by Sissy Spacek. Calvin is a scientist who makes his own fallout shelter in the garden of his house because of growing nuclear tensions. There is a party in the house, the night Kennedy makes the Cuban speech on TV and so Calvin gets rid of the guests and he and his wife go down into the fallout shelter. At that moment, a US jet fighter has engine trouble and the plane falls on the house leading Calvin to think the bombs are falling, so he locks the door and sets the timer for 35 years... Their son Adam is born and brought up in the sheltered environment of the well, shelter, and is taught French, German and Latin by dad, and dancing by mum. When the 35 years are over and the locks automatically disengage, Adam gets sent out to find supplies and a girlfriend and comedy ensues. The film is not a great classic, but it is a little gem, sweet and perfectly-formed. There are all manner of time-related misunderstandings and Adam has baseball cards and stocks worth millions (though he doesn't know it). The score I give it might seem low considering how much I like the film, but it's not really worth more... 3/5
Posted by BeeVee at 15:15