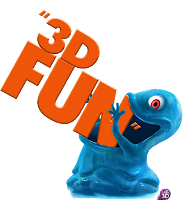 We've seen this film twice now, once in 2D once in stereoscopic. Before I proceed onto a potted review of the film itself, I just want to talk about the difference seeing it in 3D made - not much apart from a lighter wallet. Seeing it in stereoscopic added another 9€ to the costs of the tickets and didn't actually add much to the experience. Sure, there were the ooh bits where the scientist in Antartica played with the bat and ball game and a few other such moments but in the main it didn't really add a lot to the film.

Onto the film itself. We saw it in French so some of the dialogue was no doubt lost to us, but it was a fairly standard plot with the creature from the black lagoon, the blob, the 50' woman, the fly and Gamera all of whome have been captured by the government and put to work defeating an alien invasion. Lots of stuff for grown-ups familiar with the genre, from the Close Encounters theme, Steve McQueen's baseball throwing to the initial missiles from the attacking warplanes hitting a shield à la ID4. The quality of the animation is splendid as you'd expect apart from a couple of the vehicles in the Golden Gate bridge sequence where it looked like the previz models and animation got left in final compositing! Bob (the blob character) must have been a swine to animate but his seamless nature never wavered.

All in all, enjoyable, beautiful, but nothing startling. 3/5
Posted by BeeVee at 12:29