Review: Gake no ue no Ponyo (Ponyo on The Cliff) 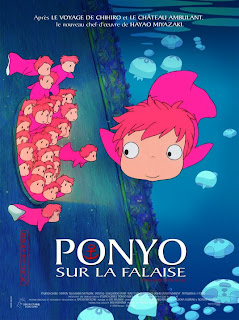 Just back from seeing the sublime "Gake no ue no Ponyo", known in English as "Ponyo on The Cliff" and "Ponyo sur la Falaise" in French. It's a hand-drawn animation that really shows up CG in the opening sequence with thousands of moving elements (shoals of fish swimming). In terms of intended audience age the story is pitched between Totoro and Kiki and there were several nods to previous Miyazaki films with the flooded road being reminiscent of Chihiro's flooded railway, Fujimoto resembling a thin male Yubaba, and the baby they meet being a normal-sized version of the big baby (no, not George Dawes) from the same film. The story goes that a five-year old boy called Sosuke rescues a goldfish trapped in a discarded jar and names it Ponyo. The goldfish is actually the offspring of Fujimoto and the goddess of the sea and when Ponyo is in Sosuke's company she realises she really wants to be human too. There are plenty of extended wordless sequences that just allow you to appreciate the quality of the animation and the film is never boring. Where it sits on my chart of Miyazaki films? Difficult to decide just on one viewing, but it's up there with Totoro and Laputa for sure. The only fly in the ointment is that there's no release date for the UK for it, and although this is not even a really widescreen production (I would say 1.76:1 at most) it really deserves to be seen on the big screen. 4/5
Posted by BeeVee at 17:28