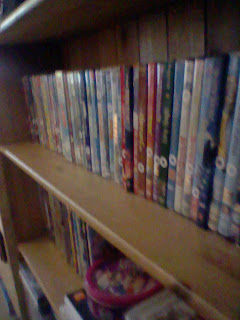 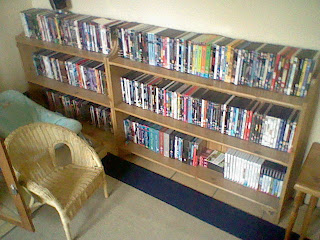 We have 440 DVDs in our collection. I have a note of them all on my Palm and we have them arranged on bookcases around our living room. The ones in the portrait photo are in "Finn's collection" and on the other shelves they are in ours. Since we have all these DVDs, and since there are a couple still in their shrink wrap(!) we decided (well I did) that we should watch them all at least once to make their purchase worthwhile. Now, this is not a problem with the films in Finn's collection, so I struck those off the 440 to watch at least one recorded time. Also, TV series on disc would take a disproportionate amount of time to watch, so I knocked those off too. That still left us with over 260 to watch. With my work the way it is now, it's not always easy to find time together to watch a film, but one of the strictures placed on this watching was that we both had to watch the films, even if it was topics we didn't care for.

Anyway, the Star Wars films are part of our collection, so watching TPM and AotC counted against the total we had to watch, so even though they are really bad, there was one good thing that came from watching them, we're now down to 220 left to watch (and with eps 3-6 still to go, that'll be another four off the list). I shall try to remember to do a little review of the films we watch on here in case gives the reader (there's probably only one, right?) the incitement to watch a film.

Goodbye Lenin 4/5(223)
This is a lovely film. It starts as a farce, with the mother of a young guy (Alex) in East Berlin going into a coma (bear with me okay) just before the Berlin wall falls and so missing the changeoever to a capitalist society. Alex is allowed to take her home to recover when she wakes, but on the understanding that she is subject to no shocks, so Alex rearranges the flat back into its communist state, getting rid of all the new furniture they bought and so on. He enlists his wannabe film director friend in helping to make fake news bulletins to cover up lapses in the deception and the humour is based around these cover-ups. At about the 2/3rds point, another event occurs that changes the tone of the film to bittersweet and it plays out beautifully. 5/5

PS. Pics taken with the DSi camera
Posted by BeeVee at 18:14