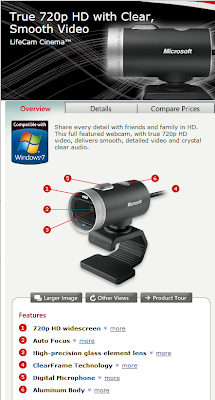 Please excuse me Microsoft for just stealing an image from your site, I just want to say that my last two purchases from Microsoft have been excellent value for money - first Windows 7 Home Premium with both 32- and 64-bit versions for fifty quid, and now the camera you can see to the left for fifty euro.

I only needed a new webcam because while the Logitech one I had was fine it was too big to sit on my monitor, which is sitting under a shelf with only about 5 cm clearance, meaning that any video conversation I had with someone involved me having to look to one side of the monitor. I have had Logitech webcams since webcams were an everyday thing to have on a computer (to go with my Logitech mice and keyboards) and have been very happy with them, so I didn't buy one from another manufacturer lightly...


Unboxing
Too much packaging, but very nicely done. It takes a while to get the camera out of its nest of plastic and cardboard, and then the usb plug has the end covered with a friendly reminder to not unsheath it until you have installed the accompanying drivers. My machine runs 32-bit Vista Home Premium still since I haven't yet installed my Windows 7 in 64-bit and I do not know if this camera's software will run under 64-bit (I have seen reports on websites that suggest it will).


Hardware
This camera oozes quality, even at the price. While you probably won't be fondling it all the time unless there's something odd about you, the aluminium construction is solid and sturdy and a nice thoughtful touch is that the flexible strap for the back of the monitor can also double as a stand for the camera if the monitor top is just a bit too high (as it might be in my case, not sure yet). The cable to the USB plug has a built-in plastic wire tidy that's very nicely done too. The camera captures 720p video at 30fps according to the blurb and the built-in microphone situated on the top of the camera has noise cancelling features that seem to have worked well in test conversations I have conducted with innocent vict willing test subjects.

Software
The Lifecam 3.0 software weighs in a just over 300 MB on the CD, which seems excessive even for those used to Logitech's bloatware, but the Camera settings that pop up on the taskbar whenever the camera is in use - I will be almost exclusively using it with Skype - allows quite a few Augmented Reality-type tricks, like the stars that rotate above my head wherever it is in frame as shown below: 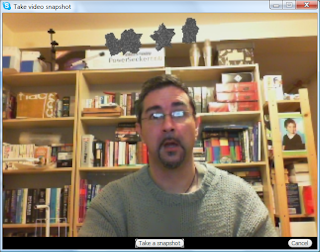 These, along with pan and tilt and zoom controls are available through the little settings window that appears when you left or right click on the taskbar icon. As you can see I have made my head teeny here: 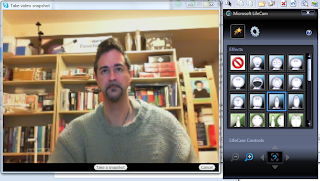 You can get a much better impression of these in motion obviously. There is an odd lack in the software however. My Logitech camera offered the possibility to reverse the image to make it easier to indicate things without having to think too much (since we're all used to our mirror images), the Microsoft software doesn't have this feature.
Conclusion
This is a lovely bit of kit. Skype's video quality depends on processor power as well as camera quality meaning that since I don't have a superfast machine, the video I have displayed to others on Skype calls isn't very high resolution or sharp and so hard to judge against my previous camera. Even so, the fact that it can sit above or below my monitor and the quality of the built-in mic meaning I can do away with the headset if desired meaning that it was a worthy use of my money. 5/5

One calendar to rule them all

I've been trying to locate a way to link my Datebk6 calendar on my Palm (a Treo 680) with some kind of .ical-compatible calendar on the PC so that I can have all my appointments, etc. wherever I am. I do use the Google Calendar since GMail is such an important hub for my work, so that's the one I'd like to work with.

Things I've tried so far:
Dang! Since the Treo is dead tech, it seems that the only alternative to stay with some kind of PalmOS is to get a Palm Pre, but the cost is out of my budget for now, especially if bought on a contract. Gah
Posted by BeeVee at 00:33 No comments:

Review: Max and the Magic Marker

It's not often I buy a WiiWare game. For my money the only one worth the Wii points has been World of Goo (though I did buy Swords and Soldiers and Bomberman Blast). World of Goo is now joined by Max and the Magic Marker.
Max is the story of a young boy who receives a marker pen in the post without any explanation to its function. He draws a monster with it and this monster comes to life and escapes from the paper! Max now needs to get him back and you might need to use that magic marker to help you with the puzzles along your way...

The game is ideal for the Wii. It uses the Wiimote as the marker pen, and the Nunchuk as the joystick to direct Max where you need him to go. Its standard platformer action is good enough as it is, but then there are areas that are too difficult to reach with the normal jumping behaviour and this is where the magic marker comes in to play. You can draw a staircase for Max to climb, or a block to drop on the head of the pesky purple monsters. It gets more intricate though, if you draw multiple lines that cross they get "glued" together to form a single object to enable you to go a bit further with the designs needed and then there's another twist. You can hold down the A and B buttons to freeze the action whereupon the graphics transform into a kid's drawing style. At this point you can draw at your leisure and when you unfreeze your drawing is in there already. This allows you to jump in the air, freeze, draw a box under Max, unfreeze and have him land on the box. He could then jump again, you freeze and draw an additional platform under Max's feet and so climb up the screen in this way.

The learning curve is well-adjusted. My son Finn who is nearly seven loves it and it makes a nice change from shooting games. With the simple introduction of the puzzles including signposts giving you a hint what to do the first few times you encounter a new puzzle, the fun of the game is not tempered by the frustration of failing to know what to do to reach your objective.

The game has crashed a couple of times, and a couple of times the camera has zoomed off to an area where you can no longer see Max or your marker and your only recourse is to restart the level you are on, but even this doesn't stop the game from being extremely polished in only 40MB (the maximum allowed on the WiiWare shop). The graphics are pretty and clear in both the normal and frozen "kid's drawing" versions, and the sound effects and music are very well-chosen.

Lastly, on the Press Play website there is a demo of Max playable on your computer (not on the Wii itself), that uses the free 3D engine Unity. Have a look and I'm prepared to bet that you too will shell out the 1,000 Wii points necessary to buy the game... 4/5
Posted by BeeVee at 21:52 No comments: