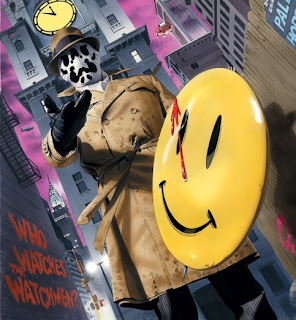 Okay, is the film any good? Well, the delay and the false starts have certainly been long and many so people's expectations of Zack Snyder might be too high to live up to. Certainly, the boy dun good wiv 300 (and there's a nice nod to it in the first 10 mins or so of Watchmen). I will give you my impressions, there may be spoilers involved so I shall ROT13 them so they aren't immediately legible. ROT13 is easy enough to decrypt by hand and there are many, many websites (or even Thunderbird extensions) devoted to the task too should you wish to read them.

Okay, first the non-spoilers. The film is okay. The characters are quite well-drawn; Rorschach's mask is splendid; Archie is well-realised and Bubastis is lovely. The CG is for the most part quite invisible and yet this is not the masterwork we all want it to be. The fights are too frequent and go on too long - imagine if half of three of the twelve issues was devoted to fight sequences? Sometimes, the words feel forced, as though the actors are unnaturally trying to repeat verbatim what is said in the comic and don't feel comfortable doing it.

Jon Osterman deserves a paragraph to himself. His creation is beautifully done, although I think they make him look too melancholic, not distant enough. He works well at all scales and unlike in the original comic book his knob is on full display! :D There's no explanation of why he has the hydrogen symbol, nor how he reduces his costume, but there are several shot-perfect sequences, such as him getting himself dressed for the TV interview and his first large-scale appearance when Rorschach comes to visit.

Overall, if you are not expecting any more from this than other filmed Alan Moore works (with the possible exception of From Hell, which I never read), it will be fine. If you don't know Watchmen at all it will be fine. If you deeply love the original story it will be okay and
you'll be relieved that it didn't come out worse. I'm glad I've seen it, the DVD with all the extra stuff, like Tales of the Black Freighter, will be a must-buy, and I'll give it 3/5 overall.
Posted by BeeVee at 20:59