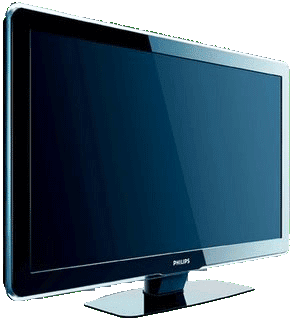 Remember how I said I'd review the TV once we had it all set up? Well here we go.

Looks
This television looks fantastic. Its monolithic black construction might appear huge if not palliated by the fact that because it's so thin it doesn't seem to take up much space. The gloss black finish does mean it attracts dust like students are attracted to the Glastonbury festival though, so an anti-static cleaner is a must (or a Filipino maid on hand). Although we use our universal remote control (a Logitech Harmony 525), the remote supplied with the TV is a very no-nonsense understated black job.

I/O
This TV comes with three HDMI ports (two on the back with space for another, and one on the side), two SCART sockets, component and composite (on the side). The TV is a full HD set at 1920 x 1080p and has a built-in DVB HD tuner meaning that we get HD French TV. It also has a USB port on the side that you can put pictures, music and firmware upgrades on.

Performance
The first thing to do when you get the set is to turn off all the "intelligent" colour and brightness settings. They make the picture just too vivid, too saturated. Other than that picture quality is good, even on SD material and a good DVD really shines. The HD signal is something else entirely and it is amazing to see. Because our TV gets DVB, the French version of which is TNT, it means that some programmes, notably films, have multiple soundtracks, much like DVDs, so we can actually watch films that would normally be dubbed into French in their original English on French TV. Channel changes, particularly between HD channels feel very slow.

Conclusion
We bought this TV and then found that there was an offer in another shop that basically got the 42" version of the same TV for a little less than this cost, but it had only SD TNT and 42" would really be too big for our lounge I feel. So I am pretty happy with this set. It's still early days to be able to see how well it performs over an extended period and we haven't really explored all its features yet. It's our first HD set, so we might be overly amazed. An HD signal is great, but DVD brought over improvements than just resolution over VHS, so I'm still expecting to see something else - the fact that digital TV can have more language tracks and so on means that you do get additional features, but these are related to digital TV, not HD.

We are getting a Freesat HD box in the post shortly so I will update this review once we have that. 4/5
Posted by BeeVee at 01:02

Great Post!This is a great television that packs a lot of bang for the buck.The Philips 37PFL5603H 37-inch plasma LCD HDTV is a graceful imposing presence.

I greatly enjoyed looking through your blog at "http://beevee-notes.blogspot.com/2009/03/philips-37pfl5603h-94-cm37-lcd-tv.html" and found an informative one for my theme related topics.I have also some entertainment,music,dish TV,satellite TV,music related sites and blogs. So,I think it would be beneficial for both of us if we will join in a community and become link partners to each other which will help your blog/site in getting more Google values.If you are interested then please contact me at-
ami.roberts86@gmail.com

I like your style of writing. You break it down nicely. Very informative post. Keep up the good work.

A shitty model. By default it selects Dolby Surround if this is available. However, the sound is clipping when I am watching HD channels with surround. This can be solved by manually selecting regular stereo output.

So what's the problem? You simply can't save your manual sound settings in any way. As soon as you change the channel and change back, the sound has been reset to Dolby Surround, and it's clipping again.