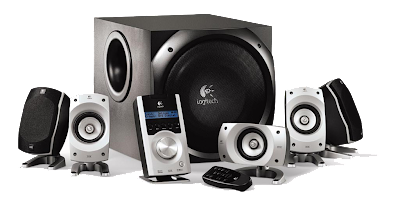 I've wanted an amp and speaker setup since our Aiwa stereo packed in two years ago. That was only Pro-Logic, but there wasn't an easy replacement for it. Either we went for a dedicated tuner/amp and speakers or we were faced with having to buy a separate DVD player with amp and speaker combo, which I really didn't want to do. Then I spotted this set and found a few very positive reviews on it. Logitech's top-of-the-range speaker system has been around a while now (I found reviews from 2007), and I can see why in this age of rapid turnaround and obsolescence that is so. The Z-5500 handles Dolby Digital, Pro-Logic II, dts and is THX certified. The connections on the back of the control unit are one SPDIF optical, one SPDIF coax and three 3.5mm connectors. These can either be used for one direct 6-channel input, from a computer for instance, or three separate 3.5mm inputs - I have two used right now, one for an Airport connection and one for the Wii. There's also one 3.5mm input on the side for connections that aren't as "permanent" and a 3.5mm output for headphones.

The four main speakers are identical, while the centre speaker looks similar, but is on its mount horizontally rather than vertically. The Z-5500 comes with standard speaker cable for all five speakers in 4.5m lengths for the two front speakers and centre, and two 7.5m lengths for the rear speakers. The cables all connect to the sizeable and weighty subwoofer unit, as does the control box into which you plug the outputs from your sound generating devices.

We've tested the speakers with several movies now (Constantine, Kronk's New Groove and The Fifth Element) and speech was clear (apart from one sequence in Constantine we had trouble hearing in the cinema as well indicating a deeper-seated problem than just with this sound system), the surround was excellent and the bass was certainly rumbly enough. For playing music through iTunes (via an AirPort Express connection) was okay but seemed a bit thin until I swapped the effects mode on the amp to "Stereo x2", which duplicated the front speakers with the rear speakers. The Wii also outputs sound through the amp now and Sonic Unleashed (the only game I've tried so far) sounded great.

All is not perfect with the system. I would like it if the speakers didn't have their bases attached - the centre speaker is quite obtrusive in front of our TV. The 1-3 speaker switch isn't very well explained until you actually look into the manual, making the quick install sheet less useful, but the biggest problem for me is that considering Logitech also make a universal remote in the Harmony, the commands for the amp aren't very good. The effects switch between DD, dts, Stereo and Stereo x2 doesn't have discrete commands, but rather a simple toggle to switch between them meaning that you need to keep pressing that Effects button until your desired mode comes up, rather than simply hitting "dts" or Stereo x2 for instance. Considering the lack of feedback possible because the remote is purely a sending device, it seems daft to actually make it harder to know what Effects mode you are currently in.

Even with this black mark, the Logitech Z-5500 is an outstanding system. It may have been conceived purely for a rich kids' PC but it works for my needs as an AV amp admirably. 4/5
Posted by BeeVee at 18:23

Dear z5500 brother,
I have used to all the versions
Logitech z560 with the normal setup analog with company wires and

Logitech z680 did pump enough power even when I replaced it Audigy 2 zs platinum when connecting via optical connection and replacing the 16 guage wires..

Now Logitech z680 is busted because my dad misused it.

i am gonna use it with AR optical connection with the same 16 gauge wires with my new Logitech Z-5500 how do u feel...

Planning to buy in India thru the company person.He sourced to our known retailer..Is this price compared to US is it cheap??
Let me give u the price

I feel z-5500 has improved its dolby digital sound output...

I am very impressed with these speakers. I have not yet gotten a digital connection, but I can't wait. The sub is quite powerful, but not as big as so many people mention.