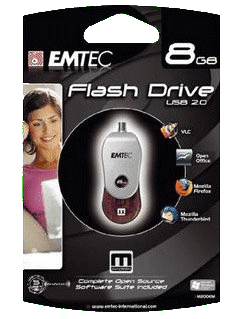 I was a fan of the U3 portable app standard. I had an Emtec USB key that had it and it worked well. Unfortunately that key is nearly dead now, so I got a new one of the same type expecting the U3 launcher to still be on there. The key I got is pictured to the left, and as you can see it's an 8 Gig device (my previous one was 2GB) and cost about 25€.

The new key comes with a portable app launcher called Em-Desk and the drive is just one device (the previous USB key was seen as two devices by Windows, one a CD so that the U3 app could be in a protected space). 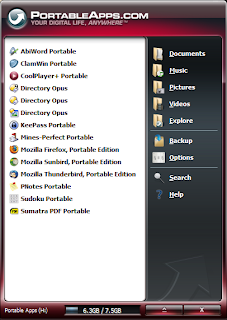 Unfortunately, Em-Desk is pants. You don't seem to be able to add new programs to it and it's pretty ugly. I used U3 for two things above all - running Directory Opus on machines that didn't have it, and running password keeper Keepass. Neither of those could be easily added to Em-Desk, so I went looking for an alternative. I found PortableApps pretty quickly and the versions of it with more than just the app come with Keepass. Directory Opus has drivers specifically for U3, but having a portable version is very easy with PortableApps too, just use the Backup and Restore... function in your Dopus Settings menu and choose "Export to USB Flash Drive". Once you've copied your installation there (and everything comes across from your 'normal' DOpus installation) you just need to move the DOpus.exe file and DOPUS directory into the PortableApps dir on the USB key (you do end up getting three Opus icons in your PortableApps list as shown here, but you only need run the first one in the list).

The key seems pretty fast reading and writing and it's nice that you only have one icon for it now (no fake CD) and the form factor is great. I am disturbed that the red LED stays on all the time the key is inserted in the machine now, but other than that, highly recommended just get rid of Em-Desk and get the open source PortableApps instead from http://portableapps.com/ Needless to say this is a Windows-only thing.
Posted by BeeVee at 14:39