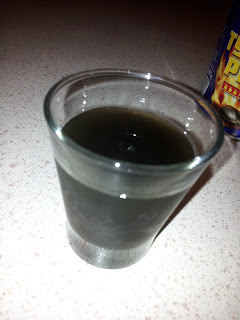 If you have spent any time in Finland, or you have some friends from that snowy country, you may well have encountered a drink called Salmiakki Korstenkova, or Salmari for short. It's a vodka-based, salted liquorice-flavoured delight that will please any liquorice or aniseed lovers out there. It caused a stir in its native Finland when it was first put on sale because it was taxed as a liqueur but it had an ABV of 38% and thus had the largest alcoholic bang for the buck, or Euro, of any drink on the market. This meant it was the tipple of choice for hardened drinkers in Finland until it was removed from sale and put back on with a reduced ABV of 32%. This was how I tasted it in Los Angeles courtesy of a Finnish friend.

I thought I could perhaps make my own and discovered that the process was very simple. Take a good bottle of vodka, I had a litre bottle of Russian Standard, which maintains an ABV of 40% even though most have sunk to 37.5%. Drink about 200 ml to leave enough space in the bottle and furnish yourself with some Fazer Tyrkisk Peber from World of Sweets in Germany. The delivery was fast but expensive although the price of the liquorice seemed reasonable.

Have the vodka at room temperature and introduce one of the pastilles to the bottle every so often (I used about 80% of the tin in this bottle). Let them dissolve over the course of a couple of days, then put the bottle back in the freezer to serve at a low temperature in a few days' time. Yum. 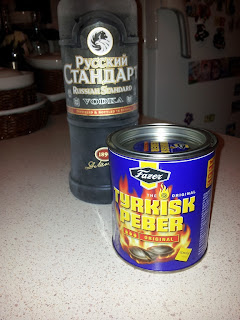