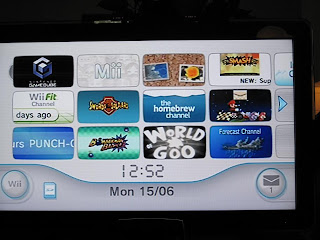 I've hesitated for a long while before posting this because, well just because, but it's all info freely available on the web, I just Googled for things (I did not "Bing" them). Since System 4 came out for the Wii, with obstruction of the famous Zelda save game loophole, it was thought that the Homebrew Channel was dead and buried, but it may be easier to install than before (I didn't try before System 4, but since I don't own any Zelda games I would think that method would be harder). 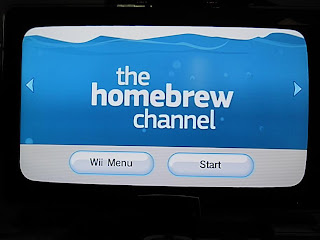 To start off, all you need do is visit this site. It provides you with details of how to go about installing the Homebrew Channel on your System 4 Wii. Why would you want to? Well, it's not for piracy, despite what official sources say. There are a growing number of independent applications that a) don't require official licences or packaging and b) this is the way new developers start, without the learning avenue of independent thought all we'll get is ever-safer sequelitis or movie tie-ins from the few remaining established publishers at huge prices.

You will need an SD card for this to work, and SDHC cards and MicroSDs in SD card adaptors work for me having tested an 8GB SDHC card, a 256 MB SD card and a 2 GB MicroSD. 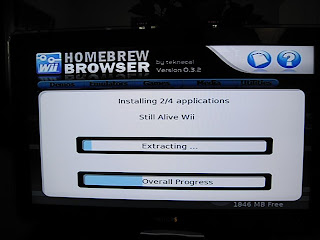 Once you have this, visit the site I listed above and get the software you need to get it installed. I used the Bannerbomb tool and the first piece of software I installed (after the Homebrew Channel, obviously) was the Homebrew Browser, a self-updating browser of all the games and apps that are available directly through the channel - My faves include the 2D Portal games Portii and Still Alive; Picross for the Wii (since there isn't an official one); Google Earth for the Wii in WiiEarth; various utilities for loading and saving games and Miis and the not-very-useful-but-good-demos of Balance Board tools and Spirit Level. The Homebrew Browser is available on the same site as the Homebrew Channel itself. There are also numerous emulators of games (like Scumm, Quake and Doom) and platforms (including the NES, SNES and N64 obviously, but also the Amiga and even Mac, although I haven't tried any yet).

Anyway, the Homebrew Channel will doubtless be "cured" with the next system update again, but it's a great thing to have. Publish your homebrew game to the Homebrew Browser and let me know so I can try it out!
Posted by BeeVee at 12:56

You have a nice blog. Now there is an easy way to unlock your WII. WII Homebrew can unlock WII within 5 minutes. You can check it out here http://myhomebreware.com/wii-homebrew.html.