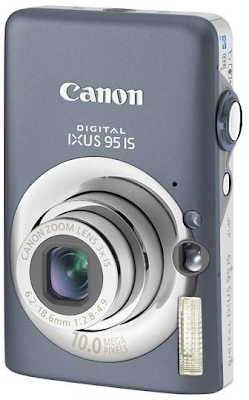 We've had a Pentax Optio for a few years now. It replaced our Fuji that was our first digital camera, so the immediate leap in resolution, screen size, speed and image quality amazed us. This replacement comes faster on the heels of the Pentax, but even so, amazes us in its own way. One of the reasons we needed a new camera was that the Pentax's startup time was seemingly an age - when most of your photos are of kids it's very easy to lose the moment, so the fact that the Canon is ready to go in less than a second is more a necessity than a luxury.

We're not photographers so by leaving it in full auto we don't feel limited and actually appreciate the speed at which it reacts to new subject material (such as going into portrait mode when it detects one or more faces). It does mean that the camera is never silent as it busily whirs to change the focal distance and aperture, but it's good that it's busy trying to make sure I get the photo I want. 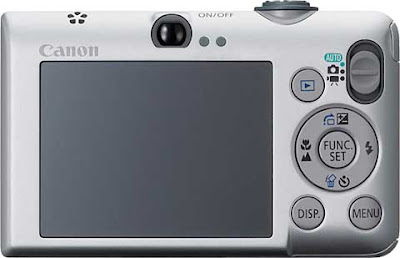 The camera is smaller even than the Pentax we had before, but feels very solid in use. The zoom control is the twist-around-the-shutter-button type, while I preferred the Pentax's dedicated button, but by the same count, the switch on the back between full auto, program and video means you don't have to go into menus to video something like you do on the Pentax. The screen on the back of the camera is also accompanied by an optical viewfinder if you'd rather make the battery last as long as possible, but since it's not TTL and you don't have the same info overlay you do with the screen, I don't think it's really a worthwhile addition to the camera. The macro on this camera is from 3cm compared to the Pentax's 10cm, which makes for better shots of insects and the like (not that I've photographed any yet to find out if the autofocus places emphasis on just the wrong part like the Pentax did). The camera apparently has the same Digic 4 processor as Canon's high end DSLRs looking for faces and other subject types the whole time and the camera certainly feels responsive. There is also red eye correction while shooting or afterwards that works very well in most cases, although eyes that are side on get left a little red, as is usual. Lastly for me, the fact that the camera supports Canon's PictBridge system (as might be expected) means that you can hook the camera directly to the printer and print out perfect shots.

Software
I didn't install the CD that came with the camera, but it's the usual mix of Canon stuff: the picture navigator and so on. They are okay as far as manufacturer software is concerned, but I have no need of them. So let's turn to the way the camera's UI is organised. First off the Play button on the back allows you to simply turn on the camera to show pictures you've taken, without "extruding" the lens and when in program mode, the different settings are easy to reach through a simple menu system. It's a shame that you can't do a rule of thirds display in auto mode (seemingly) since that would really help with composition since you no longer need to worry about exposure, white balance or anything else, but this is a small exception to an otherwise well-organised camera. 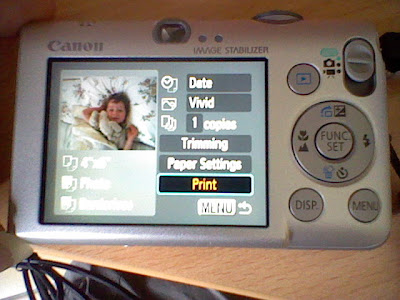 When you're connected directly to a PictBridge printer, a new screen pops up to allow you to select one or more shots to print out. My only gripe here is that although the printer displays a panel saying "let your camera choose settings" you still need to set the paper tray on the printer, otherwise you get lovely photo prints up in the corner of an A4 sheet if you're not careful, this however is almost certainly an EBKAC rather than a problem with the camera. Even so, what's the point of asking what paper size you want in the camera without at least verifying that there's paper of the requisite size in the printer, and where?

Conclusion
We bought the camera for 199€ and it came with a Canon case and 4GB SD card, about the same price we paid for the Pentax four years ago, and half what we paid for the Fuji in 2000 and it's certainly a fine camera for the money - lightning fast in use and producing some great-looking images, particularly when printed. One of the reasons we settled on this specific camera was thanks to a very in-depth review on the Photography Blog website and I recommend you go there to see example images taken with this camera since they set up specific test cases including chromatic aberrations, macro tests and more that I really don't have the time or inclination to do. Overall, this camera is great. There is very little to complain about if you have a PictBridge printer as well for very quick, good-looking snaps. For more serious photography, why are you even looking at a compact camera? 4/5
Posted by BeeVee at 15:53

Email ThisBlogThis!Share to TwitterShare to FacebookShare to Pinterest
Labels: review

I really like this camera! I have taken about 25 shots with it so far, mostly in the local park. The images are all sharp, which shows that the optical image stabilization works, because some of those shots were zoomed in.

i very like with canon ixus 95 is because it is very portable, easy, and stylish with colorful style