Today we made a big element of Finn's Hallowe'en costume for this year. For about two months now, he has been saying he wants to make a Predator costume. First, he's never seen the film - he's 12. Second, I tried to explain that I am there to help him, not make it for him. I am happy to help in any way he needs, short of actually completely doing the thing while he watches TV or plays on a phone. So here we are, a week before 31 October...

Finn, like all kids, has been watching YouTube and there are some ace Hallowe'en costumes on there. When I opined that Predator was going to be difficult and expensive to make Finn switched to something else he'd found on YouTube - Sonic. Right from the off this would be difficult to pull off but oh no, he explained, there's a guy that shows you how to do makeup on YouTube making a version of Sonic that riffs off the Sega original. The video only last 12 minutes, it's easy! So we watch the vid:

Despondent at those bad grown-up-type people spoiling his fun, Finn's face was set in grump. I tried to find another solution... A year or so ago, I had noted this on Etsy:

So I pointed it out to Finn and he was reservedly interested. I told him if I bought the mask he'd be mainly responsible for making it, but that I would be with him as he did so to help and offer advice. He agreed, so I bought it. It's very nice and prints out very well - the scale on A4 should probably be amended to 152 mm, but it will be slightly different on Letter.

Anyway, I printed it all out and said to Finn we'd try a test run, knowing that we would need to print again onto thicker card (or following Steve Wintercroft's solution of backing onto discarded cereal packs). He ummed and ahhed about doing it and finally this afternoon cut the pieces out and started folding them where needed. Between the two of us we came up with a completed, if not expert, skull after a couple of hours! 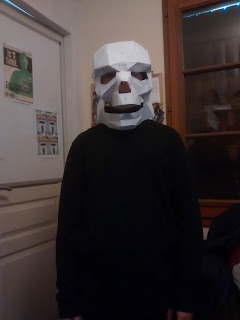 Because of the time needed, I have bought some 170gsm paper for the printer and we'll print directly to that. It might not be as sturdy as backing on card, but it will be easier to achieve I think and faster to do. Finn actually enjoyed the fairly fastidious work involved with making the mask today (and the next time will be more so!) and had a real sense of achievement at the end (and lots of praise from me). We still need to sort out a costume to go with and I reckoned he should be completely in black (as in the picture). If I can get some phosphorescent paint for the mask it would look a little like he's just a floating skull, which would be cool. We'll see, I'll post our progress.

The reason for this post being called "Blame YouTube" is that I think that our young'uns are getting an increasingly unrealistic view of the effort required for anything - YouTube video of 5 minutes == 5 minutes work required. Never mind that the "stars" of YouTube put a *lot* of work into what they do, it's what separates someone who gets a million views from someone who gets 30.

Hopefully, doing this will get Finn a more realistic view of what can be achieved and the amount of work needed. As it is, I have no doubt there'll be lots of handholding for this first go. We've agreed to set the Predator costume as the goal for next year's Hallowe'en so we'll see...
Posted by BeeVee at 12:11