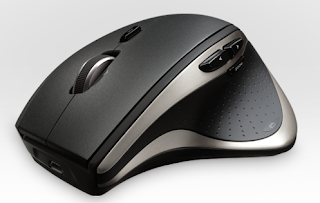 My Mx 1000 died on me about a month ago. It was the finest mouse I'd ever used, so I wanted to get another. Of course, the march of time waits for no man and Logitech had ditched it and gone with an update, the MX-1100, which didn't seem to be an improvement to me. Nevertheless as a Logitech stalwart, I thought I might give it a go and I noticed that Logitech have a very cool offer on their UK, France and Germany site that gives you a postage paid label to send back your old Logitech stuff and they'll give you a 20% discount voucher on any purchase made from their site of €50 or more. There was a problem with my voucher and when I called up the nice folk at Logitech they checked it from their side and apologised and sent me a new voucher by email for 35%. This meant I could justify getting the €100 Performance MX mouse.

First impressions
The box the Performance MX comes in is very nice and contains the mouse, the universal USB receiver and a little leatherette carry pouch for transporting the mouse, dongle and charging gubbins around - a nice touch. The mouse has a non-standard USB port at the top end (where the cable would be on a cabled mouse) and the supplied USB charging cable can either be plugged into your computer or into a small electrical plug. Obviously, if you don't leave your machine on all the time you'll use the electrical charger more than using your machine to recharge the mouse, but you can still use it attached to the USB cable, so you could just pretend you'd bought an extremely expensive cabled mouse while charging.

The build quality is very good, with nice travel on all the buttons, but there is a slight problem with the wheel tilt as the following pic will explain: 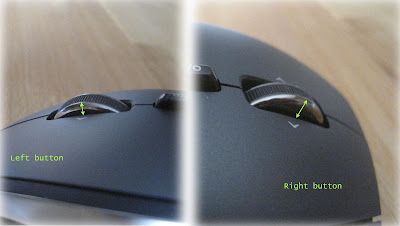 It means that while it's easy to scroll left, pushing the wheel to the right is a more delicate operation that often means an unwanted LMB click. Also missing from the MX-1000 are the cruise buttons that were on either side of the wheel. The freewheeling wheel that replaces them cannot be assigned different functionality depending on its state so you've lost two buttons. You do get a "zoom" button below the Forward/Back navigation buttons and then there's also the Performance MX's Application Switcher button, which is embedded into the thumbrest on the left side of the mouse (this is a mouse uniquely for right-handed people). 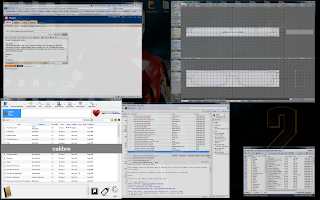 Like the MX1000 before it, this is a very comfortable mouse to use. The thumbrest is ideal for an adult male to use and the additional buttons speed up workflow a lot. I'm even getting used to using the Application Switcher rather than alt-tabbing (or Win-tabbing), since it gives a more OS X Exposé feel presenting all your apps where you can simply move your mouse over the app that you want to switch to and it gives you the name of the app as well.

On the other side, the option to switch between a clicky scroll wheel and a freewheeling one seems a little more gimmicky to me - it's not often I'll be scrolling through massive long documents trying to find a specific passage, and even if I do I'll use the Find function.

The Performance MX uses a "Darkfield" sensor, rather than the visible red light we are used to seeing under optical mice and apparently it will even work on surfaces like glass, which are notoriously difficult for normal optical mice. This may be true, but it's not something I tested extensively.

The other topic worth mentioning for everyday use is battery life. The Performance MX comes with a user-replaceable 2000mAh AA Li-Ion rechargeable battery, much better than the MX-1000's sealed unit pill-type battery. I've been using the mouse for fairly long days for about a week with needing to recharge so far, and the battery level indicator is on two bars out of three.


Software
The Perfomance MX comes with SetPoint 6, rather than the 4.8 I've been using for ages and the best new addition to this software suite is the ability to set preferences for individual apps, however, don't uninstall UberOptions just yet since you can't assign some of the buttons differently for different apps using SetPoint: 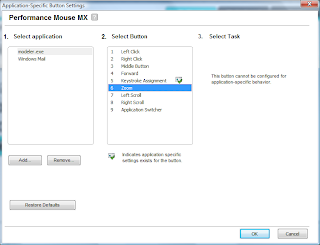 Oh yeah, and the other thing that SetPoint 6 does is update all the imagery onscreen for when you change volume, skip forward a track, mute and so on. Where previously everything was 90's TV-looking and bright green, now it's all grey and flash.

Conclusion
The Performance MX is a very nice mouse - would I have paid €100 for it? Almost certainly not, although I would probably have spent the fifty on the poorer replacement for my MX1000. I shall have to see if in the longer term it's a good replacement for the MX1000, especially since the lack of button customisation using the default Setpoint isn't great. 4/5
Posted by BeeVee at 00:33